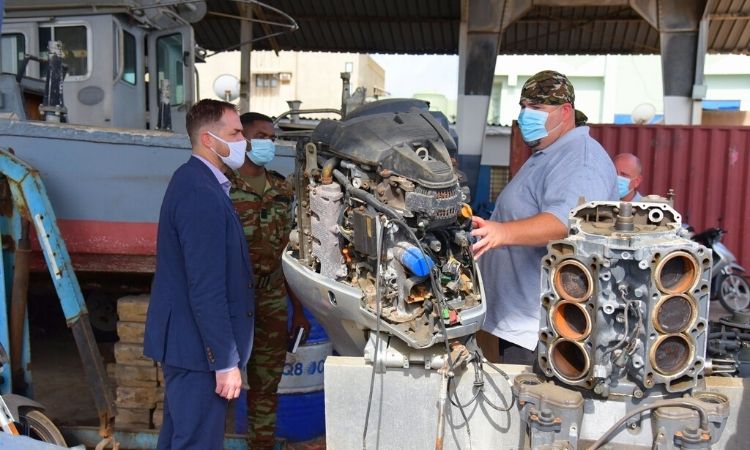 Earlier this month, a team from the United States Department of Defense visited Benin to support Beninese naval efforts to secure the nation’s waterways and combat the global menace of maritime piracy.

Working alongside sailors at the Cotonou Naval Base, the visiting American team provided training and parts to improve the performance of the U.S.-donated boats, popularly known as “defenders.” This collaboration will increase the efficiency of the defenders’ motors fifty percent, doubling the top speed of the vessels and allowing the Beninese Navy to respond to emergencies more quickly.

These efforts come on the heels of the recent Obangame Express joint-naval exercises between the United States, Benin, and 30 other nations, which aimed to enhance collective capabilities for countering the trafficking of illegal arms and drugs, human trafficking, illegal migration, piracy, and illegal fishing.

Speaking about the Obangame Express exercises, U.S. Rear Adm. Jeffrey S. Spivey, director, maritime partnership program, U.S. Naval Forces Europe and Africa, said, “… the U.S. Navy is proud to call itself a partner to the navies and coast guards of Atlantic Africa and to our broader Atlantic partners in Europe and the Americas … May we continue to further the region’s capacity to secure and protect its maritime domain through cooperation and togetherness.”