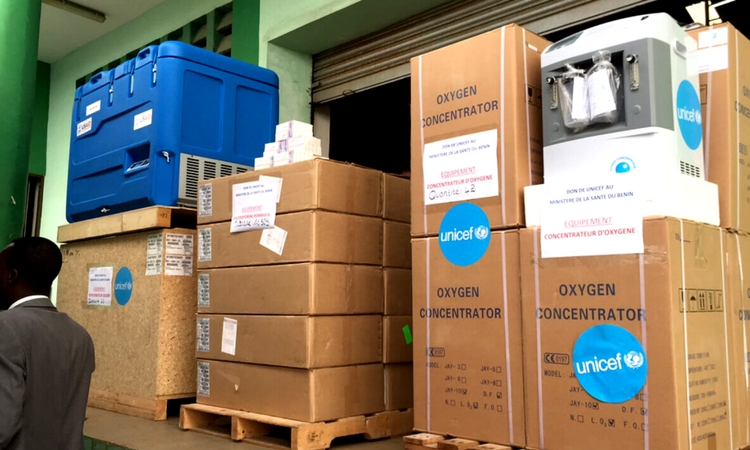 COTONOU- The United Nations Children’s Fund (UNICEF) and USAID handed over essential equipment for neonatal health to the Minister of Health, Dr Alassane Seidou in a ceremony at the Central Supply of Essential Medicines and Medical Consumables (CAME) in Cotonou on July 17.

The Minister of Health, Dr. Alassane Seidou, stressed the need to use the material equally for all children in all territories.  He further stressed the important role that CAME will play in insuring the fair use of the equipment.

USAID Acting Director Christopher Hynak expressed USAID’s satisfaction with the Decentralized Immunization Initiative (IVD) and UNICEF’s own actions to support the Ministry of Health in its needs for equipment and materials for vaccination when he stated, “This donation is an excellent example of meeting the needs of Benin while collaborating with our partners.”

The program from UNICEF and USAID amounts to more than CFAF 200 million and donated the following:
• 41,503 tubes of ointment for 20 communes;
• 42 incubators to strengthen the care for newborns during the first moments of life for the Cotonou National Hospital, the central hospitals of Abomey, Parakou, Alibori, Zou, and Calavi as well as health centers in 15 communes.
• Four 4 × 4 vehicles for distributing vaccines and monitoring for the Alibori Health Department;
• 22 solar refrigerators for vaccine storage.

The donation, the second of 2017, is scheduled to donate: 164 motorcycles, 12 4 × 4 vehicles, 59 refrigerators with accessories, 66 concentrators, 1 reanimation table and other small equipment made available to the Ministry of Health.

Since 2014 USAID and UNICEF have donated more than $1.7 million USD in equipment to the Minister of Health.