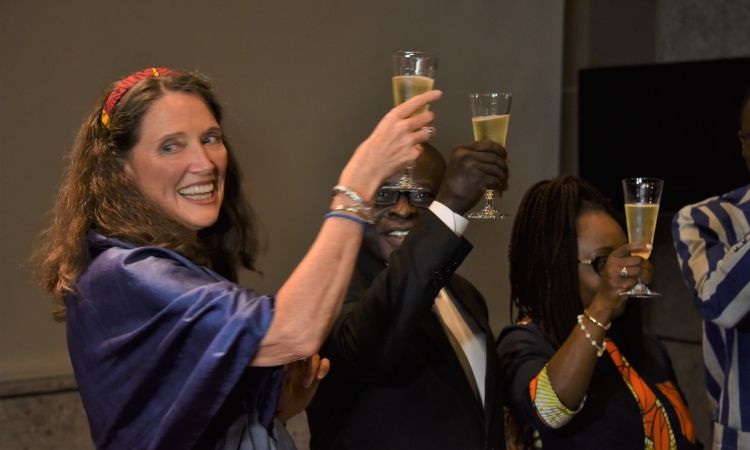 U.S. Ambassador to Benin, Patricia Mahoney, said both events represent the history of human race, of all the peoples of the world, which consists in pursuing, trying, thinking, and dreaming to make the impossible possible.
“It is that path that our partnership with Benin is following through friendship based on faith in possibilities,” Ms. Mahoney noted.

The Chief of the U.S. Mission to Benin explained that from this perspective, the American people invested more than 100 million US dollars this year as part of its partnership with Benin’s government.

Providing statistics resulting from this cooperation, Ambassador Mahoney said it allowed reducing mortality in children under 5 years old by 23% over an 11-year period. The Ambassador also addressed security, mentioning joint efforts by the two countries to reinforce security in border areas, and supporting Benin’s contributions to peacekeeping operations, as well as putting an end to illegal trafficking networks.

Regarding energy, Patricia Mahoney highlighted the United States’ will to support Benin in its vison to make electricity an engine of economic growth and development.

“We share this vision. This is why we are working together on the electricity sector, thanks to our $375 million investment through the MCA Benin II compact.”
The Secretary General of the Ministry of Foreign Affairs, Hervé Djokpé, who represented the government at the July 4 celebration, extended Benin’s appreciation of its relations with the United States. Djokpé went on to say the U.S. and Beninese governments are attached to democratic values and firmly focused on the defense of human rights and the promotion of economic prosperity for the social welfare of their respective citizens.