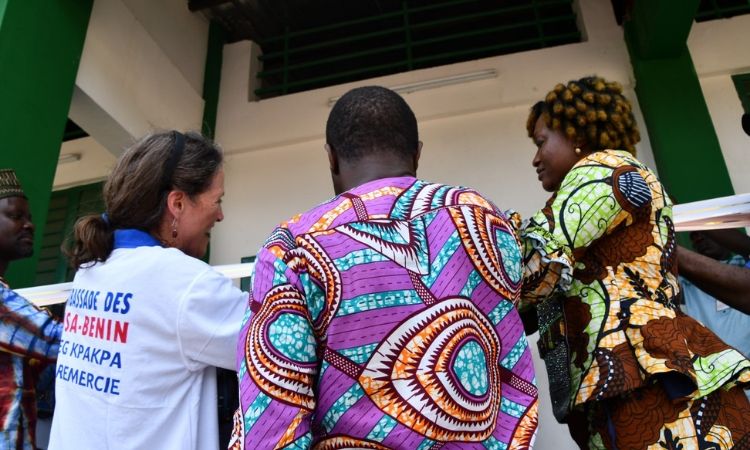 The U.S. Ambassador to Benin Patricia Mahoney inaugurated new facilities at the General High School of Kpakpa-Agbagoulè, in the city of Dassa-Zoumé, on June 20, 2019.  This building, funded by the U.S. Department of Defense, is composed of two classrooms, one office, eight latrines, and a rainwater collection system for hand washing. The building’s construction is part of a set of six projects funded by the U.S. Government for a total cost of about 2.3 billion CFA ($3.9 million USD) over a seven-year period.  These projects include the construction of community health centers, libraries, dormitories, latrines, and about thirty classrooms.

Until 2009, there was no school in Kpakpa-Agbagoulé, and students had to travel over 20 kilometers to get to school in Dassa or Glazoué.  This situation led the community of Kpakpa-Agbagoulé to build a small school from scrap materials. The Student Parent Association, with the help of Peace Corps Volunteers acting as teachers, submitted a project to the U.S. Embassy for the school’s construction.

During her remarks, Ambassador Patricia Mahoney noted the building has a connection to the National Water Company (SONEB) network, which will allow students to have access to clean drinking water.

The Chief of the U.S. Mission to Benin also emphasized the major role that education plays in the transformation of society.  She expressed the hope that, with the construction of these classrooms, the U.S. contribute to Benin’s efforts to create a better learning environment for the young Beninese.  This vision aligns with commitment by the U.S. to support efforts by the Government and the Beninese people to create a prosperous, healthy, and inclusive future.