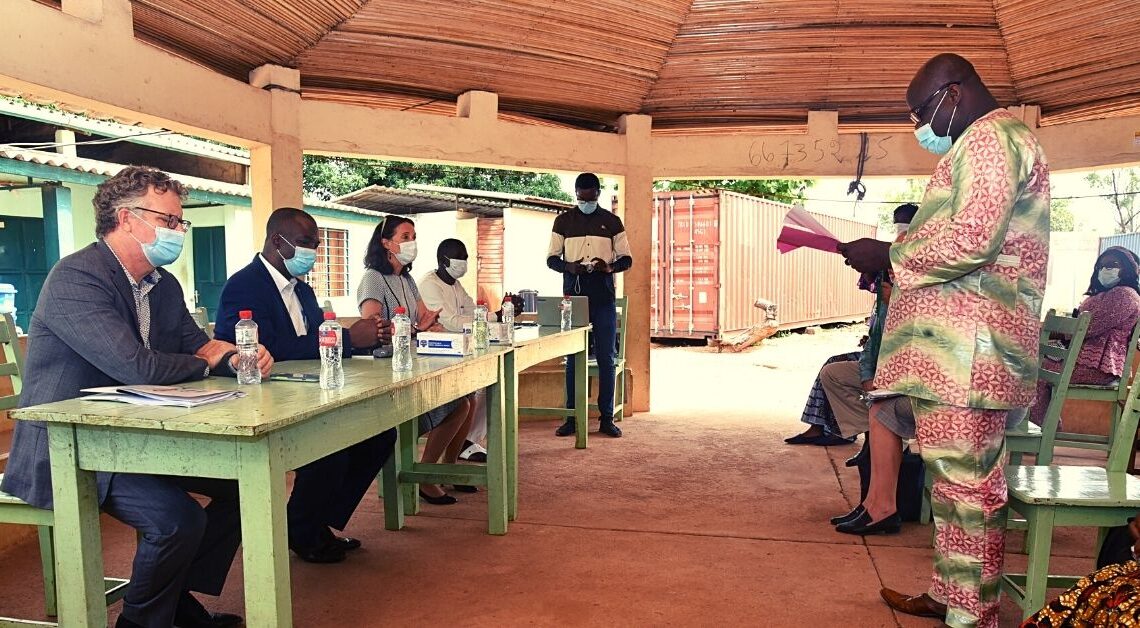 May 28, 2021 – U.S. Ambassador Patricia Mahoney visited Nikki, Parakou, and Tchaourou from May 24-27, 2021 to meet with local leaders and partner organizations and to assess U.S. government efforts to support cultural, educational, and health development in the Department of Borgou.

In a meeting with His Royal Highness Sabi Nayina III in Nikki, the Ambassador expressed her appreciation for the rich cultural and traditional values of the Bariba people and other communities of Nikki. She also met with the Mayor of Nikki to discuss needs and opportunities for future collaboration in the commune.

The Ambassador joined the Mayor to visit CEG Danri, a school in Nikki in which a four-classroom module was constructed with $550,000 in support from the U.S. Department of Defense Humanitarian Assistance program and completed in January 2021.  Since 2012, the Humanitarian Assistance program has provided $8.5 million to build 14 schools or school additions, including 51 classrooms and three laboratories, as well as 38 latrines, one cafeteria, two dormitories, a library, an intake center, and two health clinics across Benin.

At the Museum of Nikki, the Ambassador met with tour guides benefiting from a U.S. Embassy-funded public diplomacy grant to Beninese NGO ONESIME.  The program aims to develop English language in the tourism sector, expanding the potential to attract Nigerian, American and other Anglophone tourists interested in discovering the rich cultural heritage of the Bariba and other communities in Northern Benin.

In an interview on radio Su Tii Dera in Nikki, Ambassador Mahoney said, “I am very happy to finally have the opportunity to visit Nikki, a city that I have been wanting to visit for a long time, based on its cultural and historical importance, not only in Benin, but also in the whole region.” The Ambassador encouraged the radio’s editorial team to continue to play their important democratic role to ensure needs of citizens and their communities are discussed publicly so that they can be addressed by citizens’ representatives in government. The United States has provided more than $200,000 to support media organizations and journalist professional development since January 2019, in order to strengthen media professionalism and investigative journalism in Benin.

Ambassador Mahoney attended the English Challenge Club’s annual semi-final at the Mathieu Bouké high school in Parakou.  There, she encouraged motivated students to learn and practice English, opening doors to scholarship opportunities and career development.  The U.S. Embassy, in partnership with the Benin Teachers of English Association, supports and trains leaders of hundreds of English Clubs like the English Challenge Club across the country.

At the American Corner Parakou, Ambassador Mahoney presided over the donation of more than $13,000 in new furnishings, equipment, and materials to support U.S.-Benin educational and cultural exchange at the University of Parakou.  The American Corner Parakou is one of four American Spaces in Benin offering free and open access to online resources, books, and activities about American culture, English language, and entrepreneurship.

In Tchaourou, Ambassador Mahoney visited USAID’s Young Logisticians Professional Program (PJLP), where she met local officials and Minthohoué Joachim Adande, a young Beninese professional, to discuss the local management of health supplies, such as equipment for fighting COVID-19. The PJLP places 30 young professionals in communes to manage digital data and ensure health facilities are consistently supplied with quality health products, and is a key component of American efforts to strengthen Benin’s health system.

The United States has invested more than $100 million across all twelve departments since January 2020, in numerous projects to promote the protection of human rights, democracy, security, health, and economic empowerment for the people of Benin.  For more information about grant and educational exchange opportunities, please visit https://bj.usembassy.gov/ or follow the U.S. Embassy on Facebook at https://www.facebook.com/usembassybenin/