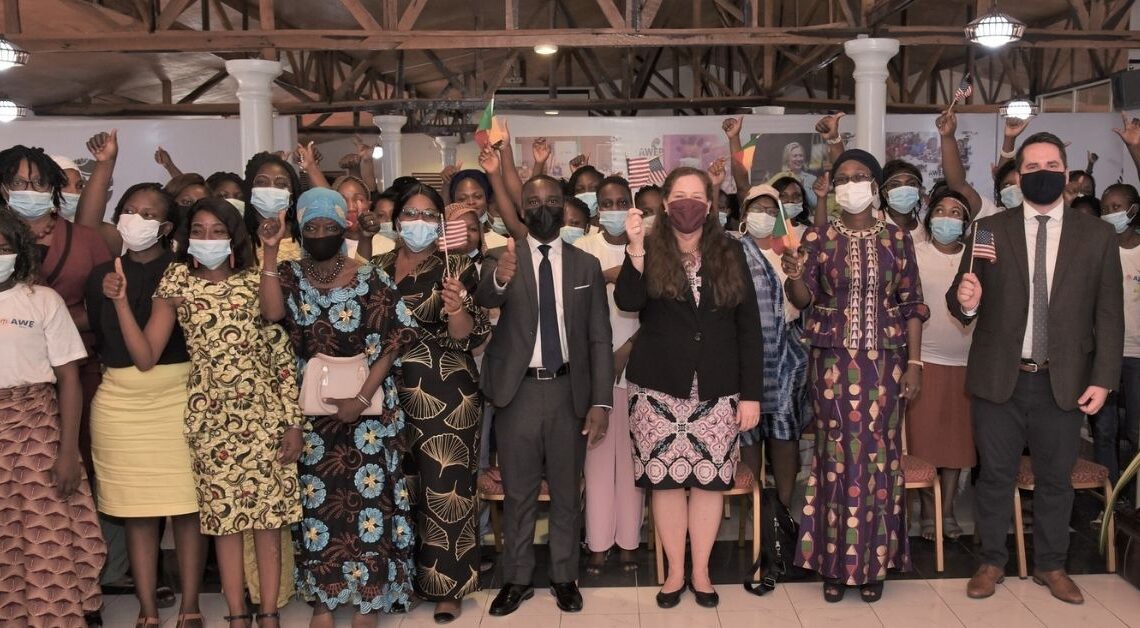 Throughout 2021, 120 women entrepreneurs from five departments in Benin participated in the AWE program, sponsored by the U.S. Department of State. These women were selected in June to participate in the program in Abomey-Calavi, Bohicon, Parakou, Porto-Novo, Savalou, and Tanguiéta. AWE Grow-Up Week took place in Cotonou to conclude the 2021 program and allow participants from different backgrounds to establish contact with each other in order to build a large network of AWE alumni.

During AWE Grow-Up Week, the head of AWEP-Benin, Ismène Ahamidé Zoumenou, along with her team, walked the 120 young women entrepreneurs through conferences and site visits.  The young women participated in presentations from representatives of several networks such as the African Women Leaders Network (AWLN), the Women’s Energy Entrepreneurship Initiative (WEE), the Women’s Investment Fund (W.I.FUND), and the Entreprendre Benin network. Participants also learned about opportunities offered by technical and financial partners such as the U.S. Embassy, the German Cooperation (GIZ), stock exchange company SGI Benin, insurance company SUNU, the Women’s Empowerment and Demographic Dividend Project in the Sahel (SWEDD Benin), as well as the European Chamber of Commerce in Benin (EUROCHAM).

A gala dinner took place on March 11 at the Majestic hall in Cadjèhoun, in the presence of Minister of Energy Dona Jean-Claude Houssou and Minister of Industry and Trade Shadiya Alimatou Assouman.  During this dinner, 12 entrepreneurs among the 120 AWE week participants presented their business pitches. Chargée d’Affaires, a.i. Stephanie Arnold joined the Minister of Energy and other officials in attendance for the cake cutting.

On March 13, 2022, acting U.S. Deputy Chief of Mission Christopher Helmkamp joined Ismène Ahamide Zoumenou for the closing of the 2021 edition of the AWE Grow-Up Week.