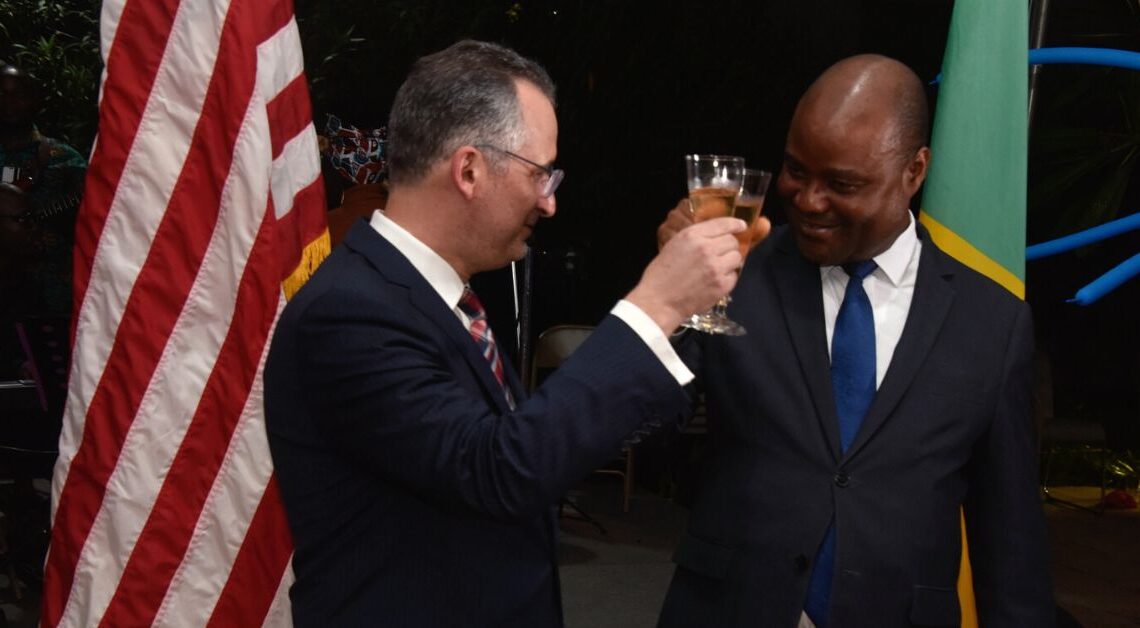 COTONOU, July 6, 2022 – U.S. Embassy Cotonou marked the 246th anniversary of the Independence of the United States at a ceremony attended by members of the Government of Benin, the Diplomatic Corps, and embassy partners.

Organized after a two-year suspension due to the COVID-19 pandemic, the Independence Day celebration focused on the 60 years of cooperation between the United States and Benin.

“Two hundred and forty-six years ago, delegates from the thirteen colonies of America came together to declare their independence from Great Britain based on the idea that every man is created equal and has an equal right to “life, freedom, and the pursuit of happiness,” U.S. Ambassador to Benin Brian Shukan said during the ceremony. “These democratic values, shared by the United States and Benin, form the basis for decades of friendship and partnership between our nations.”

The Ambassador reviewed the achievements of U.S.-Beninese cooperation, including the response to the COVID-19 pandemic through the United States Agency for International Development (USAID), the Millennium Challenge Corporation (MCC)’s energy compact, cooperation between the Beninese and U.S. armed forces to strengthen homeland security, and exchange programs like the Young African Leaders’ Initiative (YALI) which send young Beninese professionals to the United States to build their leadership skills and return home to serve their community.

Ambassador Shukan stated that in the light of challenges in the United States and around the world, President Biden has made supporting democracy a domestic and foreign policy priority.  “In Benin, we look forward to competitive and inclusive legislative elections in 2023 that will help make the country a leader in democracy and human rights in the region,” Mr. Shukan stressed.

Also addressing the audience, the Secretary General of the Ministry of Foreign Affairs, Ambassador Erick Jean-Marie Zinsou, noted that Benin is listed among West African coastal countries that will benefit from an estimated 20-30 million U.S. dollars over the next five years as part of the U.S. Strategy to Prevent Conflict and Promote Stability. “The Government of Benin appreciates the U.S. authorities’ commitment to support us on the path to economic emergence and reaffirms its determination to work for the smooth implementation of joint projects, and to consolidate and diversify cooperation,” Ambassador Zinsou added.