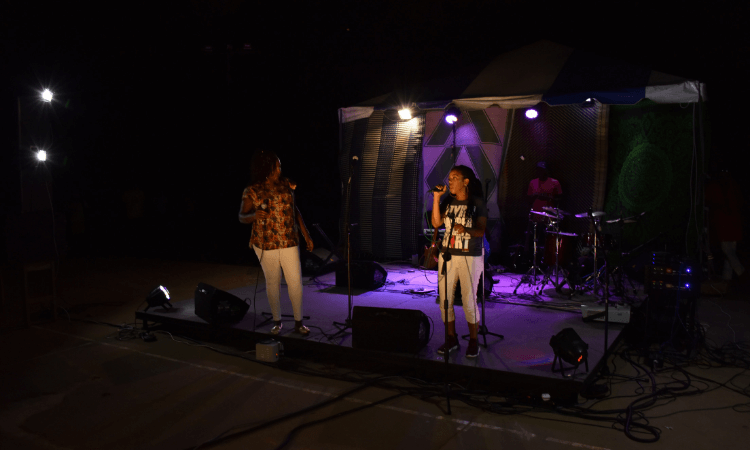 Toni Blackman and Polaryss, two U.S. rappers, toured in Benin for two weeks as part of a program known as « Rhyme like a Beninese Girl ». During this tour organized by U.S. Embassy Cotonou, the two artists hosted masterclasses with local rap musicians, music students, as well as professional musicians.

These masterclasses took place at Africa Sound City (ASC), the SOS center of Abomey-Calavi, and the Obama Center of the University of Abomey-Calavi.  The sessions consisted in transmitting the art of rap to girls and boys, and exchanging with experienced Beninese rappers.

Toni and Polaryss also recorded a song in collaboration with Africa Sound City and production company Guru Records. The record is a Beninese version of one of the rappers’ song untitled Invisible Woman.  The two rappers recorded this remix with four Beninese musicians.  Invisible Woman aims to promote women’s empowerment, call them to speak out, and to assert their talents.  The song, arranged by afro-musician and singer Jah Baba, will soon be shared as an audio file on social media, and will serve as an instrument for outreach on discrimination against women.

The U.S. artists seized the opportunity of their visit to Benin to meet with their local peers and discuss the stakes related to music, as well as the possibility to establish artistic cooperation between musicians from Benin and the U.S.

On June 1st at Africa Sound City, the two rappers gave a concert open to the public, in collaboration with Beninese musicians.  The show featured the American rappers’ titles, music performance by their Benin counterparts, as well as freestyle sessions.