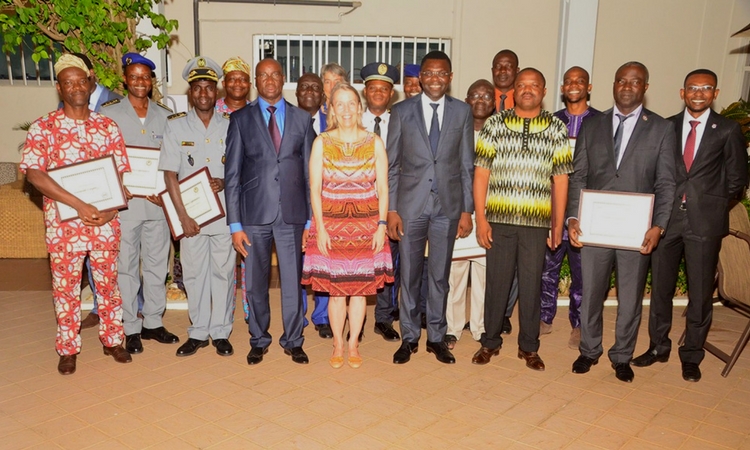 COTONOU- July 11, 2017: The handbook of procedure of the narcotics cases in Benin is a compendium of good practices in the repression of the offenses related to the narcotics in Benin. This document, which benefited from the technical and financial support of the Embassy of the United States of America, was drafted by Beninese professionals and judicial police officers with experience in the field. The ultimate goal is to harmonize the practices of law enforcement professionals at the national level.

At a ceremony to recognize the efforts of members of the drafting committee of the US Embassy manual, Minister of Justice Joseph Djogbénou, after congratulating them on their dedication to this task, recalled that the Handbook is “an instrument that sets the framework for the stages of repression” in the field of narcotics in Benin. By encouraging the US Embassy to go beyond this support, he said that “the legislator will adapt to repression” to ensure that the struggle is dynamic.

The United States Ambassador to Benin Lucy Tamlyn said that “the Government of the United States of America is willing to support the rule of law and regional security by adhering to criminal proceedings on drug Transnational implications. ”

Since the conception of the draft manual in 2014 to date, more than twenty programs have been organized by the Embassy and more than 1,200 professionals in the criminal chain have been trained on the content of the manual in Benin. After the document was officially handed over to the Minister of Justice in March 2016, six extension workshops were organized in all the courts of the country for the benefit of criminal actors such as magistrates and judicial police officers gendarmes. In the course of this year, other extension series have been carried out for the benefit of strategic units such as the Mixed Container Control Unit at the Port of Cotonou (UMCC), the Port Douanes Brigade, the Port Gendarmerie Company, and Nearly 1000 trainees police officers.

Through clear explanations, practical cases, real facts highlighting subtle mistakes to avoid in procedures, and good practices shared by members of the drafting committee of the manual, officers and magistrates come out more informed and satisfied with the And more able to fight the scourge of narcotics.

Further extension sessions will be held in various units and courts of first instance in the country. Also, reflections will be conducted to integrate the concepts developed in the manual into the curricula of the national police schools, the gendarmerie and the judiciary. The main thrusts around which subsequent activities related to the Narcotics Procedures Manual in Benin will be presented.