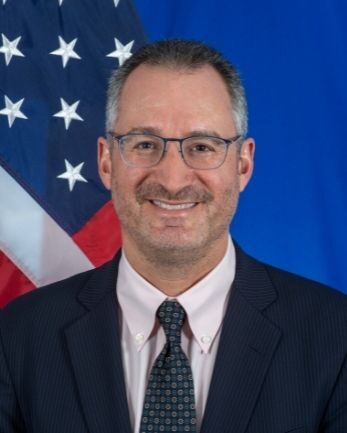 Brian Shukan is a career member of the Senior Foreign Service, class of Minister Counselor.

Ambassador Shukan most recently served as the U.S. Chief of Mission in Khartoum. Prior to Khartoum, he was Director of the Office of the Special Envoy for Sudan and South Sudan at the U.S. Department of State; served from 2014-2017 as Chargé d’Affaires and Deputy Chief of Mission at the U.S. Embassy in Port-au-Prince, Haiti; and from 2011 to 2014, he served as Principal Officer at the U.S. Consulate General in Casablanca, Morocco.

His other overseas assignments include service at the U.S. Embassies in Ghana, Iraq, Saudi Arabia, Luxembourg, and Benin.  He also served in Washington in the Department of State’s Bureau of Near Eastern Affairs and attended the U.S. Naval War College in Newport, Rhode Island.

Ambassador Shukan received a BA in history and philosophy from the University of Wisconsin-Madison, a JD from Washington University in St. Louis, and an MA in national security and strategic studies from the Naval War College.  He also attended the State Department’s Arabic Field School in Tunis, Tunisia.

Ambassador Shukan is from Longmeadow, Massachusetts.  He is married to Clare Voisey Shukan and has two children.