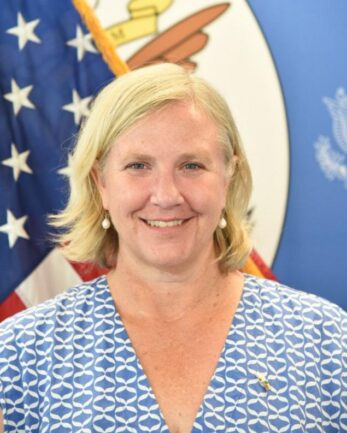 From 2017 to 2020 Karen served as the Senior Deputy Foreign Policy Advisor and POLAD to the Interagency Directorate at U.S. European Command in Stuttgart, Germany.  Joining the Foreign Service in 2001, she has held consular leadership positions in Dakar, Senegal, Rio de Janeiro and Sao Paulo, Brazil.  In Washington DC she served as the Denmark/Iceland desk officer.  Early in her Foreign Service career she served in the management section in Paris, France, and as a reporting and human rights officer in Port au Prince, Haiti.

Born in Fort Monmouth, New Jersey, Karen lived in Germany and Arizona as a child, and graduated from Mason City High School in Iowa.  Her degrees include an MS in National Security Strategy from the National War College, and a JD, MBA, and BS in psychology from the University of Iowa.  Though officially retired from practice, she is a member of the New York bar.