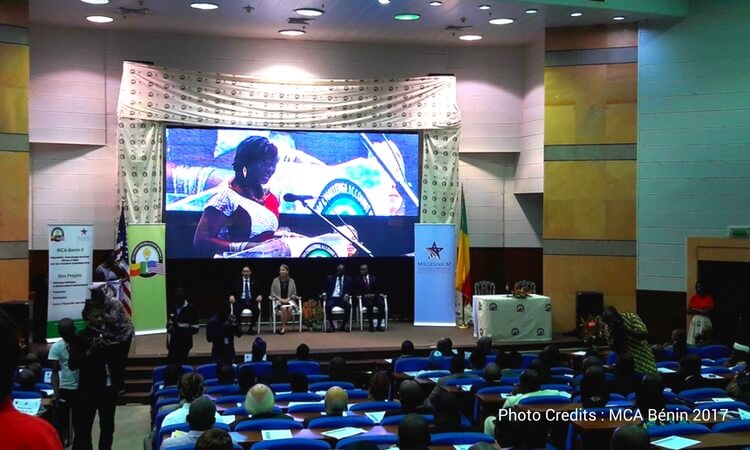 COTONOU, BENIN: On June 22, 2017 the Minister in Charge of Planning and Development, Abdouaye Bio Tchané, the official representative of President Patrice Talon, and Ambassador of the United States of America to Benin Lucy Tamlyn presided over the entry into force ceremony of the second Millennium Challenge Corporation compact with Benin.

The U.S. Government’s Millennium Challenge Corporation (MCC) and the Government of Benin signed a $375 million USD grant agreement, or compact, in September 2015 focused on Benin’s power sector. The Government of Benin is supporting MCC’s investment with an additional $28 million USD. Entry into force of the compact unlocks use of those funds for executing project activities for a period of five years, the duration of the program. MCC estimates that approximately 9.8 million people will benefit from this investment, of whom 49% live on less than $4 USD per day.

The primary objectives of the Benin compact are to increase the quantity and quality of electric power through four project areas:

“This compact represents the largest and most ambitious U.S. government grant in Benin.”  She continued, “The Benin compact supports the government’s power sector action plan, addressing a key barrier to economic development.  A reliable supply of electricity will help increase the productivity of business while improving the quality of life for all Beninese citizens.”

The Minister in Charge of Planning and Development Bio Tchané expressed the profound gratitude of the government of Benin to the United States of America and the American people for their constant support in Benin’s efforts to build a strong, democratic, and prosperous nation. He went on to note the second MCC compact reinforces the government’s firm commitment to increase Benin’s energy capacity and to ensure high-quality and fairly-priced energy to its citizens.

“It is the profound conviction of our President Patrice Talon that due to these energy reforms Benin will have an efficient, performing, competitive, and autonomous energy sector which will be able to export energy to our neighboring countries in the coming decade,” declared the Minister.

In attendance at the ceremony were members of the Board of Directors of MCA Benin, representatives from ministries of energy, development, and economy as well as members of the National Assembly, the energy sector, mayors from throughout the country, and technical and financial partners attended the ceremony.

For more information about the MCC Benin compact, please visit www.mcc.gov and www.mcabenin2.bj