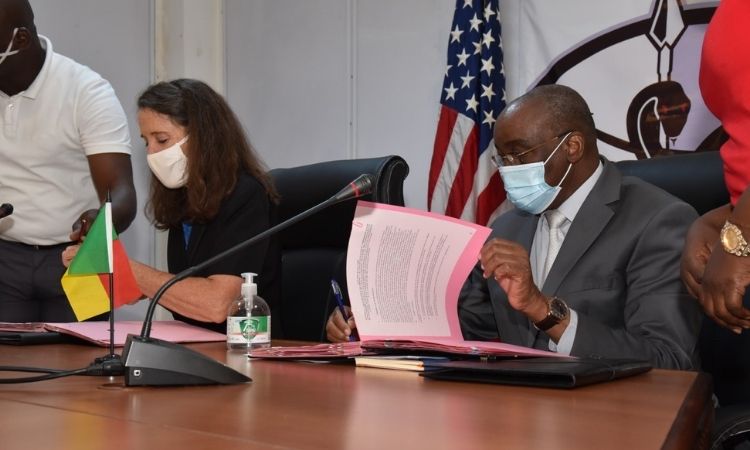 COTONOU, October 1, 2020 – The United States Ambassador to Benin, Patricia Mahoney, and the Minister of the Interior and Public Security, Sacca Lafia, signed a letter of agreement allowing for the establishment of a Special Program for Embassy Augmentation and Response (SPEAR) team in Benin. The signing ceremony was held at the Ministry of the Interior and Public Security.

SPEAR is a five-year, six billion CFA program which offers training to specially selected law enforcement officers in participating host countries, including Benin, to enable them to intervene rapidly in the event of an emergency involving U.S. diplomatic facilities or personnel. The SPEAR team can also respond to other emergencies or terrorist acts within the country.

“As part of this program, a highly qualified instructor will provide ongoing training to the SPEAR team and advise them on modern training and tactics,” said Ambassador Mahoney. “It should be noted that the team will start with 24 members of the Republican Police, then 24 more officers will be added within 12 to 18 months, bringing the total strength of the unit to 48 people.”

Once the team is fully functional, a cadre of instructors will then train additional Republican Police units to equip them with a tactical response capability.

“The SPEAR program demonstrates how far we can go together and is a testament to the partnership and cooperation between the Embassy’s Regional Security Office, the General Directorate of the Republican Police (DGPR), and the Ministry of the Interior,” said Ambassador Mahoney. “The approval of the establishment of a SPEAR team in Benin is an example of the common recognition that the West African region faces increased threats from outside its borders, threats we must face together.”

The Chief of the U.S. Mission to Benin expressed her conviction that the SPEAR team will become a unit admired for its professionalism, dedication and commitment to ensuring the security of the citizens of Benin and all those who live within its borders.

The SPEAR program has already been successfully implemented in other African countries including Mali, South Sudan, and Kenya.