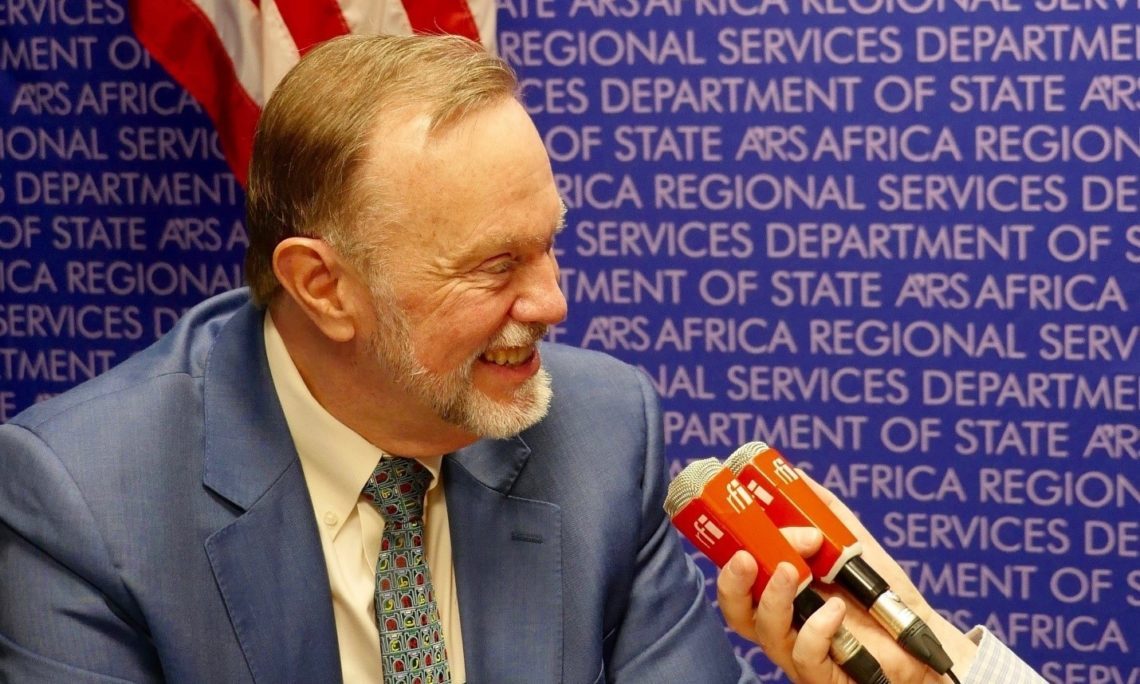 Ensuring a peaceful, stable, and democratic future for Africa’s people is incredibly important, given what is at stake.  Within the next 30 years, the population of Africa is projected to double to over 2 billion people, 70 percent of whom will be under 30 years old.  This won’t be Africa’s first “youth bulge,” however, it will be the most significant, since it projects that Africa will represent two-thirds of the net increase in the world’s population by 2050.

This huge growth in Africa’s youth population can take two directions.  If there are educational opportunities, jobs, and hope for a better future, then these young Africans can be a dynamic force for economic growth.  If young Africans are denied educational and other opportunities, then the future could be one of increased instability, dangerous migration, and recruitment for terrorist and criminal organization.

The United States will do all it can to help create a prosperous future for Africa’s young people.

Two programs exemplify our enduring commitment to Africa’s youth.  The University Partnerships Initiative is a new program we rolled out last year, which is designed to encourage collaboration between U.S and African universities.  This year also marks the 10th anniversary of the Young African Leaders Initiative (YALI), a program that facilitates connections between young  Africans and their peers in the United States.  This program already counts a number of high-level successes, including an alumni group of more than 20,000, a 2014 Somali Fellow nominated for the Nobel Peace Prize in 2019 for her work to rehabilitate young people radicalized by joining armed militia groups in Somalia, and a 2016 alum, currently a cabinet member in Sudan’s civilian-led transitional government.

In January, I had the opportunity to travel across Central and East Africa.  My whirlwind trip to six countries – France, the Central African Republic (CAR), Ethiopia, Somalia, South Sudan, and Sudan – showcased rewarding opportunities for strengthening cooperation with our African partners.  In discussions with senior government officials, international partners, and alumni of State Department exchange programs, I emphasized our key priorities, namely: the importance of promoting good governance and strong democratic institutions, advancing regional peace and security, combatting corruption, and forging stronger trade and investment ties.

My first stop was in Paris, where I held interviews with Radio France Internationale Afrique and Jeune Afrique.  France is an important partner of the United States in combating violent extremism and providing security assistance in the Sahel, and my meetings with government officials and partners there included a discussion of ways to strengthen regional cooperation.

In the Central African Republic, I started my trip with a visit to the Maison de la Memoire (House of Memories), where I met with YALI alumni at a photo exhibit memorializing the victims of Central Africa’s brutal inter-community violence of 2013 and 2014.  I emphasized the important role young people can play in changing perceptions of Africa, bringing new ideas and energy to their communities, and serving as voices for dialogue, peace, and reconciliation.  During the visit, I interviewed with a Voice of America reporter and YALI fellow, talked with bloggers at the Bangui American Center, and discussed upcoming elections, the business climate, and the United Nations arms embargo in a meeting with President Touadera.  In meetings with university students, I emphasized, “You are why I am in this job!”

For the thousands of victims displaced by recent flooding in CAR, peace and stability depends on the support of international organizations and partnerships.  The United Nations Multidimensional Integrated Stabilization Mission in the Central African Republic (MINUSCA) plays an important role in protecting civilians, supporting the peace process, and assisting CAR authorities to prepare for elections.  I toured the MINUSCA main base and met the Deputy Secretary General’s Special Representative for a briefing on politics, security and elections.  I visited the army base at Camp Kassai, where the EU Training Mission is developing the Central African Armed Forces (FACA) into a professional, effective army.  I also had a chance to meet Americans working for MINUSCA and thank them for their international service.

With Somalia’s presidential and legislative elections steadily approaching in October 2020, the need for dialogue and political reconciliation has never been greater.  In Mogadishu, I met with Prime Minister Khayre to discuss our support for a timely, transparent, and credible electoral process.  Civil society representatives talked with me about the status of women in Somalia; the upcoming elections; and about their role in rebuilding after the civil war, and their support for reconciliation efforts.  I discussed with members of the Somali parliament the need for compromise as the key to resolving political stalemates.

In South Sudan, the government and opposition have now failed twice in implementing the terms of a September 2018 peace agreement that reflects the will of the people.  The remaining time until the next February deadline will be critical in charting the country’s future.  I met with President Kiir and Foreign Minister Awut to encourage them to compromise and build trust with the political opposition.  I encouraged opposition leader Riek Machar to compromise with President Kiir and avoid another delay in forming a unity government.  In further meetings, alumni of YALI and other U.S. exchange programs shared their experiences and aspirations for a peaceful  future for their country.

In just a short time, Prime Minister Abiy Ahmed’s political and economic reforms have transformed Ethiopia and placed the country on a more solid economic footing.  Having served there in the 1980s, and later as U.S. Ambassador from 1999-2002, I have a strong personal connection to Ethiopia and its wonderful, hardworking people.  I was grateful to return to the country for a few days.  In Mekelle, I met with university officials and students at Mekelle University, to discuss the important role that universities can play in national development.  I met with U.S. exchange alumni who are working to advance U.S.-Ethiopian partnerships in education and technology.  I celebrated with the Mekelle University President and faculty at the opening of the new Mekelle American Corner, a modern space for learning, discovery, and collaboration.  In Addis Ababa, I met with officials from Ethiopia’s Ministry of Education and university presidents discuss how the University Partnerships Initiative can strengthen Africa’s educational institutions and help students develop the skills needed to join the workforce and create economic opportunities for themselves.

My last stop brought me back to Sudan.  Since I visited Sudan last August, the transitional government led by Prime Minister Adballa Hamdok has made great strides in solidifying the gains of last year’s peaceful revolution.  In meetings with the Prime Minister, Foreign Minister Asma Adballa, and opposition leaders, I discussed plans to exchange ambassadors and stressed the importance of forming the Transitional Legislative Council as quickly as possible.  I spoke with the newly formed U.S. Educated Sudanese Association, about our University Partnerships Initiative and opportunities for strengthening collaboration between U.S. and Sudanese academic institutions.  I took the opportunity to present some highlights of the trip and answer questions on our Africa policy during a press briefing with international journalists.  Before I departed Sudan, I met with members of the Youth Resistance Committees and heard about their sacrifices and successes in leading Sudan’s peaceful revolution.

As the African proverb says, “If you want to go quickly, go alone.  If you want to go far, go together.”  I’m excited about direction of our engagement and cooperation with Africa, a cooperation that creates stronger people-to-people ties and lays the foundation for increased U.S. trade and investment and unlocks the enormous potential and entrepreneurial spirit of young Africans.  My trip highlighted Central and East Africa, but the United States is equally committed to the entire continent.  Just this week, the President announced the start of discussions on a possible free-trade agreement with Kenya, which would be the first in sub-Saharan Africa.

This month, Undersecretary Hale traveled to West Africa, and Secretary Pompeo will travel to Senegal, Angola, and Ethiopia to promote trade and investment, peace, and security.  These high-level visits demonstrate our nation’s strong and enduring commitment to Africa.  As we look forward, I believe we’ll see our shared investments result in a more prosperous, peaceful, and secure Africa.

See further social media content connected to my latest Africa trip by clicking on the links in this blog.  Follow me on Twitter at @AsstSecStateAF and the Bureau of African Affairs on Facebook at DOSAfricanAffairs.

About the Author: Tibor Nagy serves as Assistant Secretary of State for the Bureau of African Affairs at the U.S. Department of State.