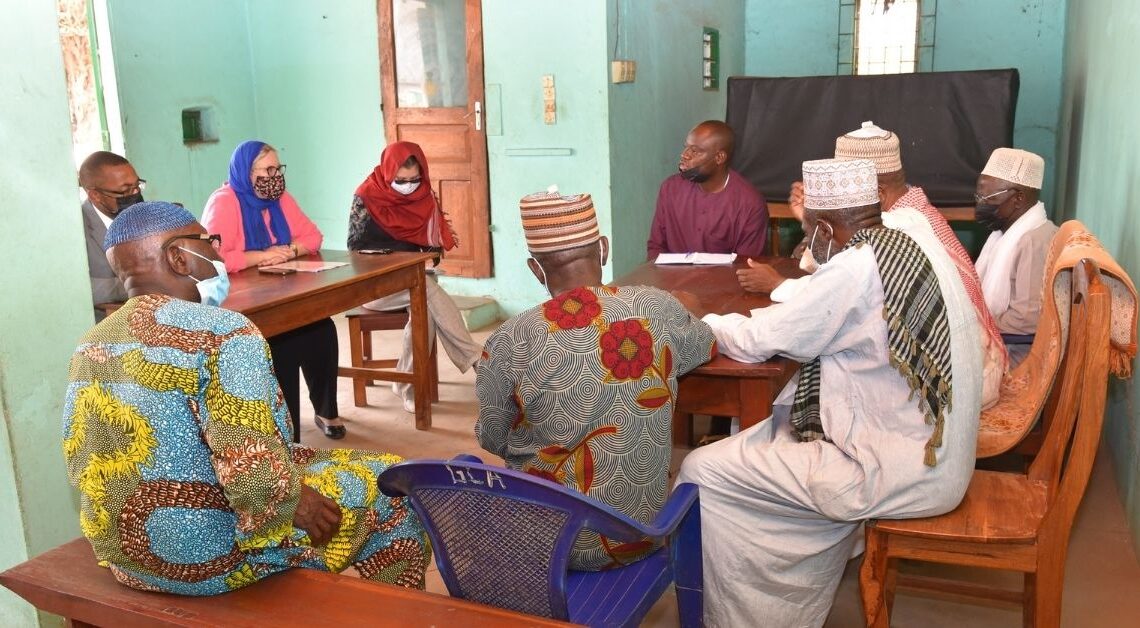 The Deputy Chief of Mission (DCM) of U.S. Embassy Cotonou, Karen Gustafson de Andrade, toured the departments of Borgou and Alibori from February 14 to 17, 2022. This tour was an opportunity for Ms. Gustafson de Andrade to meet the Embassy’s partner organizations in the north and to inquire about the security situation.

The tour began with a working session with members of the Platform of Beninese Organizations for Women’s Rights (WROP-Benin) at the Kobourou City Hotel in Parakou.  This organization receives financial support from the United States Agency for International Development (USAID) through the International Republican Institute (IRI), an American NGO which strives to increase engagement of women in political life in Benin.  Through this 540 million CFA funding, the IRI promotes transparent and inclusive elections and political processes.  The members of the platform discussed their outreach to build community and familial support for female and political participation.

The Embassy delegation also met with journalist members of Benin’s Federation of Community Radios (FeRCAB) who work in the areas most affected by violent extremism. The meeting was part of the USAID-funded Regional Support Program for Coastal Countries (PRAPC), which helps FeRCAB organize theoretical and practical trainings for radio journalists.

The DCM later visited the American Corner at the University of Parakou where she spoke with English language students about their goals and self-confidence. She strongly encouraged the students to persevere in learning English and reminded them of the American Corner’s many physical and virtual resources.

Ms. Gustafson de Andrade then paid a courtesy call on the Vice-Rector in charge of Academic Affairs at the University of Parakou, Professor Salako Alexandre Allodé.  Professor Allodé expressed his satisfaction with the American Corner’s dynamism and newly received furniture and materials from the Embassy.

On February 16, 2022, the delegation visited the camp of the 7th Joint Forces Battalion in Kandi where the DCM presented her condolences to the base commander for the victims of two jihadist attacks in Park W Natural Park on February 8-9. She also inquired about the security situation in the Alibori Department.

Afterwards, the Embassy delegation attended a training session for zemidjan, taxi and truck drivers organized by the Local Civil Society Association COEXISTER. Funded by USAID through PRAPC, the training engaged these drivers on ways to promote social cohesion.

Ms. Gustafson de Andrade then met with participants in the Academy for Women Entrepreneurs (AWE) program, which provides women entrepreneurs throughout Benin with new knowledge and tools to establish and grow their businesses.

The DCM also held discussions with the Prefect of Alibori, Ahmed Bello Ky-Samah on the challenges facing his department. She also announced funding for continuing border security initiatives with the Beninese military.

The U.S. Embassy has several projects in the region, such as humanitarian assistance projects funded by the U.S. Department of Defense or projects initiated by USAID.  In 2020, for example, DOD Humanitarian Assistance funds were used to purchase laboratory equipment and supplies for the Kandi Medical Laboratory. Later, Ms. Gustafson de Andrade met with Kandi City Hall authorities to discuss actions to prevent violent extremism in the city.

On February 17, 2022, the Embassy delegation visited the Imam of the Central Mosque of Parakou, Sheikh Mohamed Youssouf. The Deputy Chief of Mission assured Imam Youssouf that the United States continues to work in partnership with Benin to end the COVID-19 pandemic and thanked the religious leader for the collaboration of the Muslim community in the fight against this disease.

During her trip, Ms. Gustafson de Andrade also had the opportunity to interact with English language enthusiasts, USAID partner organizations, human rights’ activists, and members of the LGBTQI community, as well as with representatives from USAID-funded integrated gender-based violence centers.