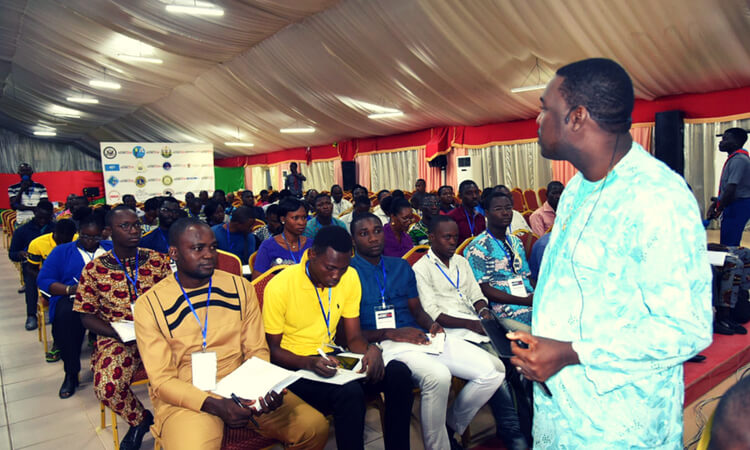 From July 23-28, 2018, the Idriss Déby Itno amphitheater of the University of Abomey-Calavi (UAC) hosted the Democracy Workshops (ADEMO), organized by the Benin Yali Alumni Association, in collaboration with U.S. Embassy Cotonou. As part of the workshops, about 1,000 Beninese young leaders received training on the functioning of the branches of central and local powers. Participants followed in-depth presentations on their role as citizens in terms of interaction with the different power components including the executive, the judicial, and the legislative powers. U.S. Ambassador in Benin Lucy Tamlyn officially launched the workshops, along with Minister of Digital Economy and Communication Aurélie Adam Soulé Zoumarou, and the Rector of UAC Maxime da Cruz.

Ambassador Lucy Tamlyn welcomed the engagement of the youth through BYAA, saying their motivation equals the conviction that the youth is key to building democracy.

Minister Aurélie Adam Soulé Zoumarou called on the public to follow the workshops carefully, explaining that in developing one’s political maturity, leaders become more rigorous in regards to the quality of governance, while supporting development.

The ADEMO workshops partly revolved around a civic instruction manual edited by the Center for Sociological Studies and Political Science (CESPo) of UAC. This manual, entitled “Political Citizenship: Elements of Civic Education” is a volume of essays edited by UAC professor Hygin Kakai, featuring articles by 28 scholars, political practitioners, professionals, and civil society actors. The publication covers Benin’s history, political and electoral dynamics, actors of the political life, advocacy groups, as well as the different powers and institutions. CESPo officially presented the book to the public on the day of the ADEMO’s launch.