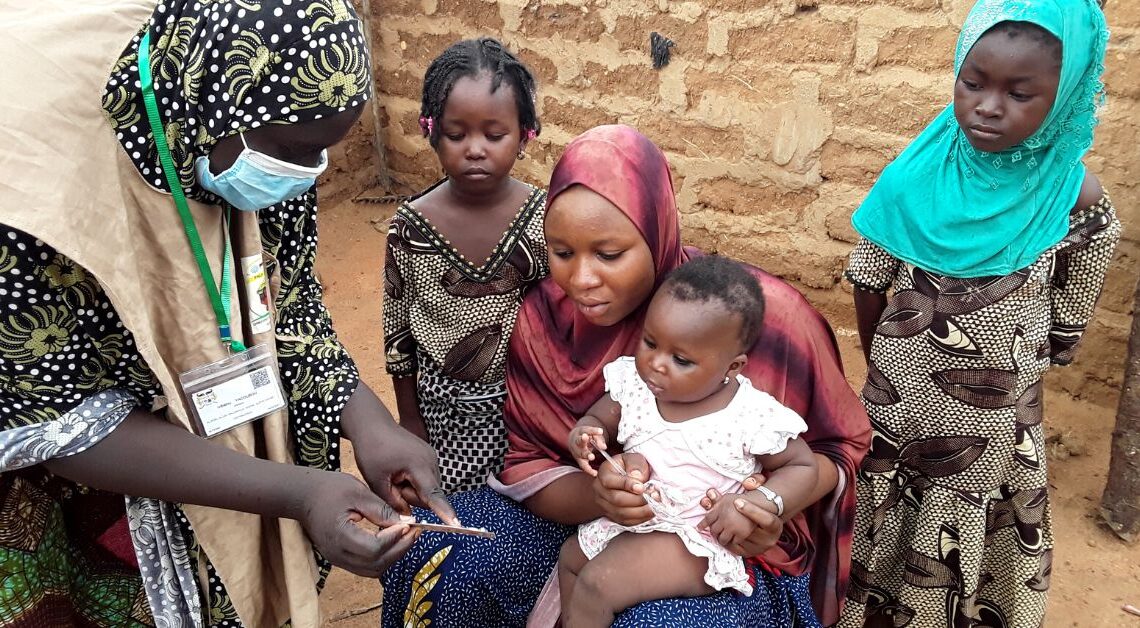 A successful partnership between the Government of Benin, PMI, and the Global Fund protects children during the rainy season when they are most at risk.

“Malaria is a burden in every aspect of our lives,” says Mariam Bagnan Zime, who lives in Alibori, Benin, with her four children. “When our child is sick, we can’t go to the health center for care and we need to stay with them due to distances and costs, which prevents us from working in the field or taking care of our business.”

Mariam’s story is common in Benin, where malaria is a major challenge. In 2020, this disease caused more than 4.7 million cases among the 12.1 million inhabitants of Benin and more than 10,000 deaths, especially among children under five. However, the Government of Benin and its partners are working together to implement innovative solutions to combat the disease.

During Benin’s rainy season, the risk of malaria is higher as the mosquitoes that spread the disease proliferate. One proven way to reduce children’s risk during this time is to give them medicine each month for three days in a row through an effort called seasonal malaria chemoprevention (SMC) campaigns. But these campaigns require significant funding and the collaboration of several stakeholders to cover all the children at risk.

Since 2019, the U.S. President’s Malaria Initiative, through the US Agency for International Development (USAID) Integrated Health Services Activity led by Management Sciences for Health, has supported the National Malaria Control Program of Benin in implementing these annual campaigns. Each year, teams of trained community health workers (CHWs) embark on a journey to deliver preventive treatment for children living in Alibori and Atacora, two of the departments where the risk of malaria transmission is highest during July–October, the rainy season. On day-one each month in PMI-supported health zones, CHWs go house-to-house to explain to caregivers how to deliver the medication to their children and observe the caregiver administer the first-day dose, so that they are able to give day-two and three doses to their child. This first campaign was a success, with more than 117,000 children receiving treatment, representing more than 95 percent of eligible children in two targeted health zones. The result was a   50% reduction in malaria cases compared to the same periods in 2017 and 2018.

After reviewing the results of this campaign, The Global Fund to Fight AIDS, TB, and Malaria — a key stakeholder in combating malaria in Benin — agreed to support expansion of the campaigns. By including two new health zones in 2020 and four health zones in 2021, all of Atacora and Alibori would be covered.

Partnering to protect more than 400,000 children

In addition to reaching more children in more health zones, this partnership between PMI and the Global Fund enabled more widespread training of CHWs, and the harmonization of processes for providing the treatment under supervision of community health workers along with data collection processes.

For example, sharing the costs of training of health workers and CHWs and purchasing supplies allowed the partners to execute the campaign seamlessly in all six health zones. Additionally, the development and roll out of a mobile app has meant that health workers and CHWs no longer need long, complex forms to monitor SMC campaigns. Collecting data for monitoring campaigns is now more efficient, timely and the data is more accurate.

The involvement of all stakeholders has enabled considerable progress. By 2021, 422,005 children in six districts/health zones received treatment, representing 90 percent of eligible children.

For parents like Mariam, these campaigns provide great relief: “The products distributed during the campaign were very well received by us. It reduced the spread of malaria for children and, as a result, we don’t have the same financial difficulties that we had previously, spending money caring for a sick child.”

Benin has launched its SMC campaign for 2022, and PMI, the Global Fund, and the Ministry of Health continue to work together to build on the achievements from the past three years to deliver a high quality SMC campaign, which includes an awareness component for health staff and caregivers to prevent malaria and hopefully save the lives of Beninese children in all health zones of the departments of Alibori and Atacora.