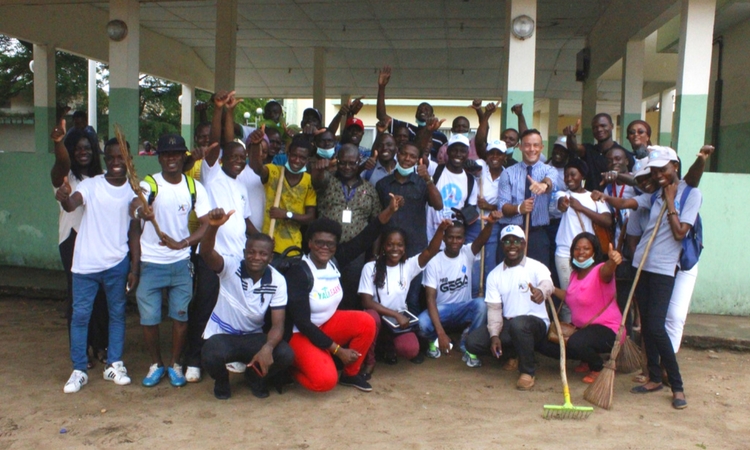 COTONOU – July 18, 2017: The Beninese YALI Alumni Association (BYAA) organized a clean up campaign at the Cotonou Civil Prison, Hubert Koutoukou Maga National University Hospital Center (CNHU-HKM) and at the University of Abomey-Calavi. The purpose of the initiative was to commemorate Mandela Day; celebrated every July 18 in tribute to former South African President Nelson Mandela.
The activity, launched by the BYAA with the support of the Embassy Cotonou​​, is a part of a regional campaign implemented by the Young African Leaders Initiative (YALI) program dedicate to enable young leaders to serve their communities through a variety of social and community activities. The YALI program has affected thousands of African youth from more than 40 countries in Africa since its inception in 2013.

The activity brought together more than one hundred participants, including members of the partner youth leader organizations like Friedrich Ebert Foundation’s Young Leaders Club, the Economic and Monetary Union of West Africa (UEMOA) Club, the Young Leader Corporation, and other youth associations involved in the development of Benin.

BYAA President Nicaise Déguénonvo explained the goal of the campaign was to honor the memory of Nelson Mandela, who was able to transform humanity through his leadership. “We believe that as young Africans it is our duty to preserve the work of this great man who left us a strong legacy,” he said.

Deputy Director of Public Affairs of Embassy Cotonou Christopher Schirm participated in the health campaign and expressed the pride of the Embassy with the participation of the young leaders.

“Nelson Mandela Day is about dedicating 67 minutes of your time to a noble cause. The dedication of these young leaders is a perfect example of this thought in action.

The day long activities ended with the screening of a film about Nelson Mandela’s life and achievements at the Abomey-Calavi campus followed by a discussion led by BYAA leaders about the importance of community service in transforming Africa’s future.