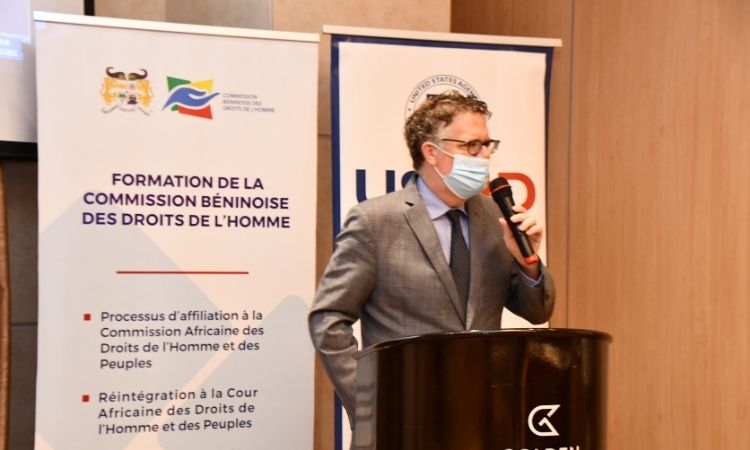 March 15, 2021 – The United States Government assisted the Benin Human Rights Commission (BHRC) with training on organizational accreditation, advocacy, and investigating and reporting on acts of torture, to strengthen the BHRC’s functions as a human rights institution.

Through the U.S. Agency for International Development (USAID), the United States supported three two-day workshops for the BHRC’s commissioners and staff between February 22 and March 11. The workshops focused on:

Preparing the BHRC’s application for accreditation as a national human rights institution with the African Commission on Human and Peoples’ Rights, in a session led by Judge Reine Alapini-Gansou from the International Criminal Court;
Strengthening the Government of Benin’s relationship with the African Court on Human and Peoples’ Rights, which was led by Dr. Horace Adjolohoun, Extraordinary Lecturer at the Centre for Human Rights, University of Pretoria and Visiting Professor of International Human Rights and Comparative Law at Central European University; and
Investigating and reporting on acts of torture, a responsibility entrusted to the BHRC by the Government of Benin, in a session led by Paul Angaman, Professor at the University of Abidjan and President of the International Federation of Action by Christians for the Abolition of Torture.

Through this training, the United States is equipping the BHRC with knowledge and skills to fulfill its mandate for promoting and protecting human rights in Benin.

“As human rights leaders, you are called to promote respect for human rights for all in Benin. The American people, through the U.S. Embassy and USAID, stand ready to accompany you on this path for human rights,” said USAID Country Representative Carl Anderson.

The United States is promoting human rights and democratic governance to advance a more free, peaceful, and prosperous world. Together, these activities are important components of American support to advance human rights in Benin.