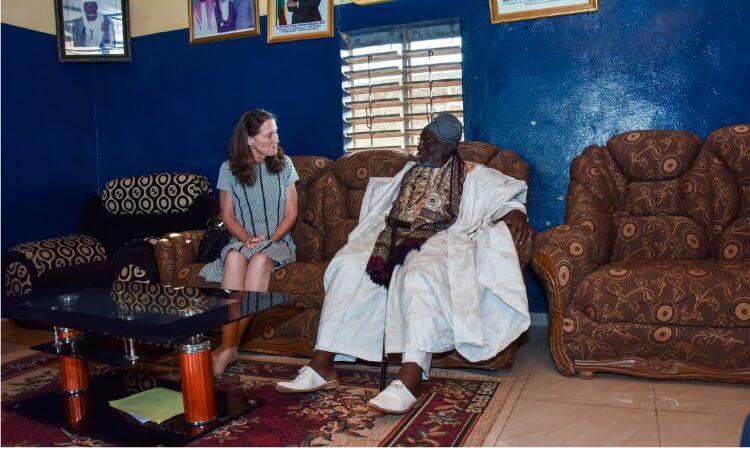 On February 5, 2020, Ambassador Mahoney paid a visit to His Majesty King Kpetoni-Koda IV of Djougou. During the visit, the two discussed ways to continue to work together to achieve the shared goals of economic development and religious tolerance, while also discussing the challenges of youth unemployment and economic migration. The Ambassador expressed her best wishes for His Majesty The King, members of his Court, and the people of Djougou, and her desire to further strengthen our long partnership in the years ahead.

The Ambassador also visited His Eminence Imam Razack Issa Samari, where she was warmly welcomed by both senior clerics and young leaders from Djougou’s Muslim community. Ambassador Mahoney encouraged the assembled youth to live up to the example set by His Eminence Imam Samari and to forge a path for themselves and their communities which continues to promote religious tolerance, diversity, and peace. She also expressed her gratitude to His Eminence for his strong support of the Embassy’s collaboration with the radio station La Voix Islamique to counter gender-based violence and violent extremism in the region. The Ambassador accepted His Eminence’s prayers for the continued good health of the President of the United States, Donald J. Trump, and all Americans, and similarly conveyed her best wishes for the Muslim community of Djougou.