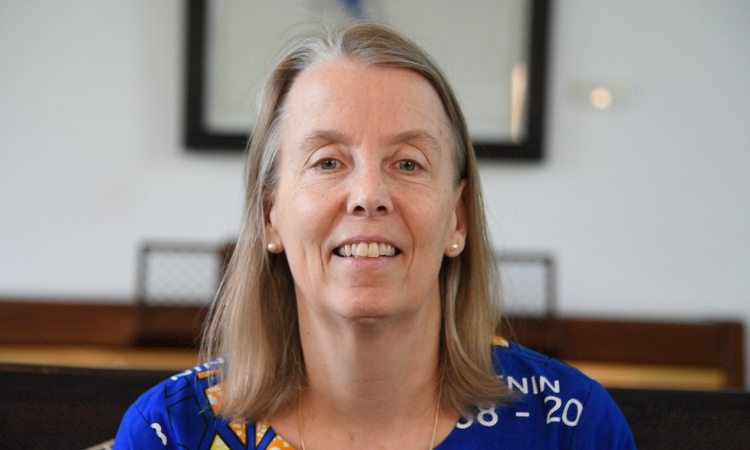 Thank you very much for joining me here today.  I will be leaving Benin shortly and appreciate this opportunity to share with you some of the accomplishments of the U.S. Mission in Benin over the last three years.

These accomplishments have only been possible with the full support and cooperation of the government of Benin.  I want to take this opportunity to express my thanks to Presidents Yayi and Talon, and the members of their respective governments.  The availability and commitment to advancing the partnership, by the leadership of both administrations shows the strength and durability of the U.S.-Benin relationship.

When I arrived in 2015, I placed a strong emphasis on the effective and transparent use of U.S. assistance, which was then ramping up rapidly thanks to the second Millennium Challenge Compact.  I prioritized working together to combat terrorism and transnational crime, which threatens Americans and Beninese alike. And I stressed our shared interest in supporting the consolidation and strengthening of Benin’s democratic institutions.

U.S. assistance of approximately $90 million [back of envelope] over the last three years has been provided by Americans who believe that investing in health, energy and other areas will make Benin a stronger, more self-sufficient country.  Our expectation, as underscored by the Trump Administration, is that over time Benin will move beyond aid into self-sustaining economic growth and be able to provide for its own people.

In the past three years, we achieved a major milestone with  the entry into force of the $403 million Millennium Challenge Compact, which will improve the lives of millions of Beninese and benefit countless businesses by strengthening Benin’s electric power sector.   With the support of the Compact, the government has adopted reforms to strengthen the performance of SBEE and bolster regulation of the sector. In 2019 construction works will start on Benin’s electricity distribution network, along with off-grid power systems serving the rural poor.

We have continued our strong support for Benin’s health systems, improving access to health care, the quality of care, and the provision of health care in the private sector, and promoting healthy behaviors in communities.  By focusing our assistance on malaria, maternal and child health, and family planning, we are also helping the Government of Benin achieve the goals set in its national health strategy. I am proud that our assistance has led to meaningful reductions in the mortality rates due to malaria.

We are very present on the ground.  We have built classrooms and funded improvements to schools that allow more students to more regularly attend classes, and have built health clinics that increased rural communities’ access to important services.  We have spent over $450,000 [three years sum] in small grants for local associations and cooperatives with an emphasis on promoting economic opportunities for rural women.

Our training assistance to the new Republican Police responds to the request by the government for assistance in the area of professional ethics, fighting corruption, and improving accountability.  We have continued pre-deployment support to Benin’s peacekeepers and are proud that they are now moving along the path to self-sustainment. We have provided extensive support to those policing Benin’s borders and waterways, and salute the efforts that Benin’s security forces have undertaken to protect the country from terrorism and other extremist violence.

This year we celebrated fifty years of continuous presence of the Peace Corps in Benin.  We now have more than 120 volunteers spread out over the country, responding to the needs identified by the government in the area of English teaching and entrepreneurship.

Our exchange programs continue to attract the best and the brightest young Beninese, and we are proud to have helped them hone their entrepreneurial skills, learn how to leverage civil society activism for the good of their communities, and be more effective public servants.  We are proud that participants in these programs include a sizeable number of women. Alongside our exchange programs and our thriving library, U.S. technical assistance has supported the government’s ambitious program to introduce the English language in elementary school.

The United States has responded to the Talon administration’s request for support for the Government Program of Action in many areas, but one that I am most proud of is our support for tourism development and bringing an awareness of Benin’s rich culture and history to the United States.   Since my arrival three years ago, exchanges with American academic institutions have blossomed, and are showing great potential.

As President Talon has himself stated, fighting corruption is one of the highest priorities, as corruption undermines development and destroys democratic institutions.  We have supported the government’s efforts to fight corruption, including via our efforts to help Beninese authorities crack down on the sale of fake pharmaceuticals. We have also worked with the media to help Beninese journalists become responsible investigators, to maintain the media’s noble role of reporting the facts on the ground without fear or favor.

Benin is to be congratulated for taking steps to fight trafficking in persons, but this is a long-term struggle.  I encourage Benin’s leaders to continue to work diligently on this problem. Benin’s recent steps forward need to lead to larger and more assertive steps to combat this scourge, sustaining positive momentum to ensure that this modern version of slavery does not rob Benin’s young people of their rightful future as educated, productive citizens of Benin.

In closing, let me stress that the American people and the people of Benin share many fundamental values, values which make us stronger as nations, and which strengthen our mutual partnership.

We both believe in multiparty democracy characterized by free and fair elections with peaceful transfer of political power; we believe that it is right and healthy for a strong civil society to contribute to the political and social life of the country; we believe in the importance of an independent and fair judicial system, free of corruption; and we believe in freedom of the press, freedom of expression, and freedom of belief.  These shared values, along with the incredible talents of Benin’s leaders in business, politics, and civil society, provide all that is necessary for a bright and prosperous future for Benin and its people.