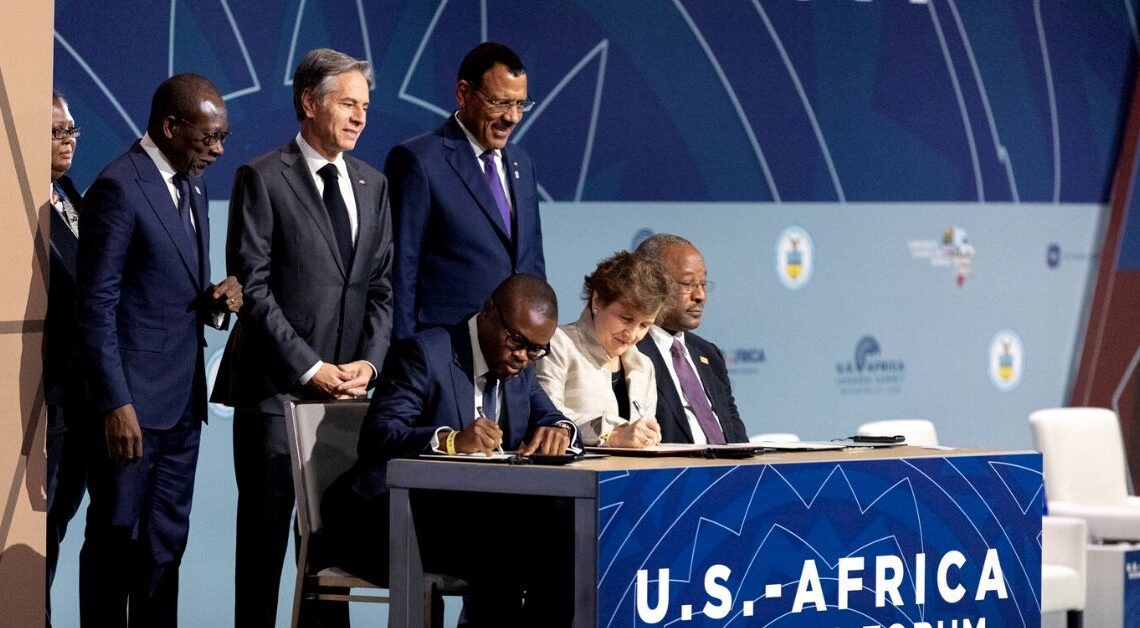 “President Talon and President Bazoum, we are thrilled to launch these new partnerships with you today,” said Secretary Blinken. “The corridors that allow products to move between Niger and Benin, these form a critical foundation for business and also for livelihoods. The [Regional Compact] projects will bear the hallmarks of America’s partnerships. They will be transparent; they will be high-quality; they’ll be accountable to the people that they mean to serve; and they will also support good governance. When completed, these projects will make it faster and safer to transport goods along roads and across borders and they’ll connect Benin and Niger to bigger markets and grater opportunities…At this week’s U.S.-Africa Leaders Summit, we have made it a priory to mobilize these kind of investments, because we know this is how you create real, tangible benefits for people on both sides of the Atlantic.”

The Benin-Niger border crossing is one of the busiest crossings between coastal and land-locked countries in the region, with an average of approximately 1,000 vehicles per day. By pairing enhanced regional integration and policy reforms with the agency’s proven, data-driven development grants regional compacts can connect countries through foundational infrastructure — such as power, water, and roads — and catalyze economic growth.

“Connecting vibrant African regional markets is a critical piece of a broader and inclusive strategy to create sustainable economic growth,” said Albright. “Countries can grow faster, create more jobs, and attract additional private-sector investments when they are a part of dynamic regional markets. Nowhere is this more applicable than in West Africa. I am honored to be part of this historic partnership with Benin and Niger.”

Along with MCC’s bilateral and regional investments, Benin and Niger will also participate in the African Continental Free Trade Area (AfCFTA). Established in 2018, the AfCFTA is the world’s largest free-trade area with a market of more than 1.3 billion people; however, it is smaller, regional economic communities that may ultimately impact each country’s economic growth and influence the effectiveness of the AfCFTA.

“This compact is a major innovation in international cooperation, and in cooperation between the United States, Benin and our brother country Niger,” said President Talon during his translated remarks. “It will help to bring together two neighboring countries to make the space more attractive to business investors…Development cannot only be from investments in infrastructure and investments in other basic needs, but for growth to be real we need private sector investment.”

“I would like to say how happy I am to participate in this [compact signing], which launches this Regional Compact between Niger and Benin,”said President Bazoum during his translated remarks. “Benin is a strategic partner for the development of Niger, because the Port of Cotonou is the closest port from Niamey. It’s a thousand kilometers from Niamey, and for a long time we have considered that this is our natural port…Our U.S. partners understood this, and have made sure that we have quality infrastructure between our two countries. We are at the end of a Niger Compact that has already invested a great amount in the road infrastructure, and this Regional Compact will complete what has already been done.”

The Benin-Niger Regional Transport Compact is designed to reduce transportation costs along the corridor between the Port of Cotonou in Benin and Niger’s capital city of Niamey. MCC will invest $202 million in Benin and $302 million in Niger. These investments will each be further supported by $15 million contributions from the governments of Benin and Niger. The regional investment is expected to benefit an estimated 1.2 million people.

The compact is comprised of two primary projects: the Corridor Infrastructure Project and the Efficient Corridor Operations Project.