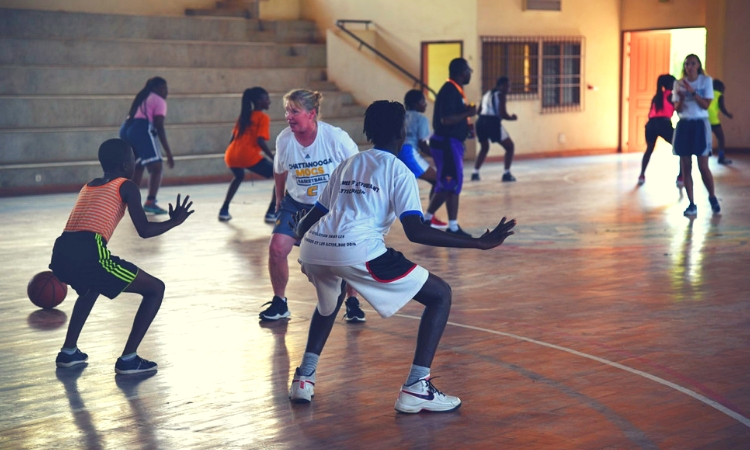 OUIDAH— September 1st, 2018 : The U.S. Embassy Chargé Laura Hruby, and the Mayor of Ouidah Célestine Adjanonhoun, attended the closing of a girls’ basketball camp at the Regional Institute for Public Health (IRSP) in Ouidah.

Known as Special Envoy Basketball Camp, the camp was organized by the U.S. Embassy and NGO OLADE, with the support of FHI 360, a United States organization, dedicated to the improvement of lives. The initiative gathered girls from high schools in Cotonou and Ouidah, coached by national trainers like Oswald Quenum, and U.S. coaches Debbie Black, Barbara Black, and Erin Dickerson, who traveled from the U.S. as part of the program.

A gala match between the camp participants marked the closing ceremony.

Debbie Black congratulated the young basketball players for their enthusiasm and involvement in the camp, and insisted on the necessity for them to keep dreaming big. As for Erin Dickerson, she expressed her satisfaction at the hard work demonstrated by participants. Speaking on behalf of her fellows, one of the program trainees Marielle Kpassassi, thanked the City Council of Ouidah for its assistance, as well as the local trainers and the U.S. coaches for dedicating six days of their time for them. “This time that you dedicated will never be wasted,” she stated.

Teslanik Houndégnon, the administrative official at NGO OLADE, said the basketball camp allowed girls to learn about sports values, which will enable them to impact their communities positively. She added the participants will benefit from follow-up activities throughout the academic year.

The U.S. Embassy Chargé Laura Hruby, thanked the City Council of Ouidah and NGO OLADE for their work in making the basketball camp a reality, and wished for the fulfilment of girls through such initiatives.